Maggie and I took a wild-eyed whitewater rafting ride on the Mishawaka Falls section of the Upper Poudre River. The Poudre is the only designated National Wild and Scenic River in Colorado, and flows through a beautiful canyon. We were fortunate to spot a group of longhorn sheep along the way.

The water level was a relatively high 1500 cfs, which made the river particularly hair-raising.

The big surprise was that I was flung out of the raft at a notorious rapid called “Guide Hole,” where the raft guide often falls out (just a short distance downstream there is another demanding rapid called “Customer Hole,” which is where you would think I would have fallen out). I blame Maggie for not grabbing my arm to keep me in the raft.

In any event, it was the first time I was the only one in the raft to fall out (I’ve fallen out a number of times in the past on whitewater trips, but only when the entire boat flipped). Others in the boat had to rescue me by pulling me back in. Because falling out in a big rapid is so exhilarating, that one event made my entire ride worthwhile, although the overall trip was a lot of fun. In fact, Maggie was surprised by how much she enjoyed it, after initially thinking that Dom was going to once again lead her into something too scary and way over her head. 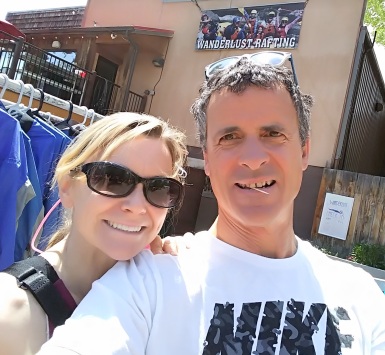 Sadly, the photographer — who had shot many photos of our day on the raging Poudre — learned when he got back to the shop that all of his photos and videos were corrupted, so we didn’t get any pictures or video. It was the first time that had happened to him in his 3 years of being the company photographer.

As I pointed out to my rafting group yesterday after we defeated the Upper Poudre River, the most dangerous part of even a big water rafting trip is the drive to and from the river (and our driving in general), not the trip on the river.

Why the Gauley? Because a few days before I set out to taste this beast, I have read that it has the most challenging, ferocious and exhilarating whitewater in North America (It is rated the 7th most difficult in the world—and of all the rivers I’ve been on, this is the only one where prior rafting experience is required.). The river is 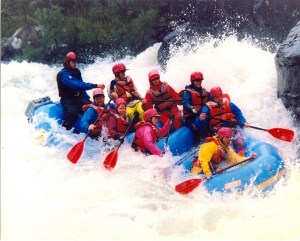 controlled by a dam, which releases water for 12 weeks in early fall. People from all over the continent flock there for that 12-week window. So popular is it that you must make reservations several months in advance of your trip to avoid it being sold out.

A group of six of us (all friends from Gainesville) overcome the terror and decide to whitewater raft the river. Gauley, after all, is considered the most difficult run in North America. We are nervous at first, but have such a fabulous time that we plan to return every fall. On the first day, our guide tells us that no one is allowed to fall out of the raft unless everyone does, at which point he promptly and unceremoniously is flung out of the raft at a rapid a few minutes later (first time it ever happened to him).

On the second day we decide to take on the much more dreaded upper Gauley with a shy, quiet, low-key person who would laugh diabolically every time he explains that a deadly rapid is approaching. He turns out to be very skilled, but the raft nevertheless flips and dumps us all near the end. Frightening at first, but after a few seconds it became quite fun. The raft company that took us on the trip was Wildwater.

The beginning of the upper Gauley run is exceptionally hair-raising. You put in just below the dam, and must paddle, furiously, straight into a 30-foot high wall of fiercely gushing water (2,300 cubic feet of water per second) from a pipe in the dam, in order to make it downstream and not get caught in the powerful eddy (as I watch this wall of water before we put in our raft, I have second thoughts about what we have gotten ourselves into). Due to the coldness of the air and water, it was important to wear wetsuits on the raft. The upper Gauley is has so many challenging rapids that it gives almost non-stop excitement. At the end of your run, you feel exuberant as you realize you have survived a long battle locked in mortal combat with a boiling, angry torrent of raging, exploding water. Nearly every rapid is a screaming descent into a treacherous, terrifying, bone-crushing liquid fury. Blind, suicidal fear strikes each time the raft guide announces the Rapid of Doom approaching.

But we somehow survive.

The river is very technical. Over 50 major rapids (100 in all), and a drop of 650 feet along it’s 28-mile course. It is the best two-day whitewater trip in North America. Class V-V+ rapids include Insignificant, Pillow Rock, Lost Paddle, Iron Ring, and Sweets Falls. The lower Gauley has dozens of Class III-V rapids such as Koontz’s Flume, Mash, Heaven Help You, and Pure Screaming Hell. The run is 28 miles for the two-day trip from Summersville Dam to Swiss. The U.S. Army Corps of Engineers lowers the Summersville lake each fall to prepare for winter and spring runoff. It is billed as one of the world’s ten greatest rivers, and with the Colorado, one of the two greatest in the U.S.

The Gauley has received “National River” status from the federal government.

Here are the photos I shot during a September 1995 rafting trip at the Gauley. 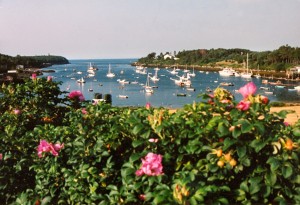 of the Maine coast. What a spectacular place! (see photo to the right in the Reich section below) Mountains interspersed with lakes, coves, rocky cliffs, forested trails (over 120 miles of trails), and views of the ocean. I need to spend more time there when I visit again. It is the highest elevation on the eastern seaboard, the 2nd most visited park in the U.S., and the only national park in the northeastern U.S. After Acadia, I participate in a five-day bike tour with a group of about 14 people (four were from Florida) through some highly scenic village and cove areas along the Maine coast (see photo to left). We see (and raid) blueberry fields everywhere. I have a GREAT time, and am eager to sign up for bike tours in the future (lets see: Europe, Costa Rica, New Zealand, the Canadian Rockies, California, Nova Scotia…). We stay at superb inns and eat DELICIOUS dinners. They really pamper you on these trips. I end up covering about 200 miles during the five days, and am surprised to hear from one of the tour guides that the average age for their tours is 45. The only minor hitch is that I have shipped my bike (via UPS) from Florida, and it doesn’t arrive until the second last day of the tour (It takes eight business days to arrive— while in Florida, I am assured that it normally takes a maximum of five days. Naturally, it takes only four days to ship back to Florida when I don’t need the shipping speed!) The tour company is Vermont Bicycle Tours.

Following the tour, I rent a car for some sight-seeing in the central and western parts of the state. The roads turn out to be well-marked, and free of visual clutter 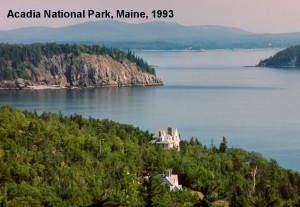 (such as billboards). Spend an afternoon at the Wilhelm Reich house: Reich was a famous (infamous?) psychologist who studied under Freud and developed a theory that a sexually repressed childhood leads to the development of adults who are authoritarian, apathetic, violent, militaristic, religiously fanatical, hierarchical, patriarchal, etc. (one of his most well-known books, which I was strongly influenced by, is The Mass Psychology of Fascism, which was an explanation for the rise of Nazi Germany). He eventually developed a theory that there was such a thing as “orgone energy,” which was plentiful in people who were psycho-sexually healthy, and which could be accumulated in an “orgone box” that people would sit in for treatment. He also developed a “cloudbuster” which, he claimed, could either generate rain or stop the rain. In any event, during the 1950s, the FDA started accusing him of creating fraudulent products. Several of his books (such as The Function of the Orgasm) were burned, and he was eventually sent to prison, where he soon died. I have several of his books. Much of what he said—especially in his earlier years—was probably quite valid and socially useful. Some of his later work seems a bit quirky, but certainly should not have led to the persecution he suffered.

Back to Maine: I spend a full day whitewater rafting the Kennebec River. It is great fun. Rafting begins at the Harris Station Dam below Indian Pond and runs through 13 miles of unspoiled wilderness to West Forks, where the Dead River joins the Kennebec. Demanding Class IV-V rapids start just below the dam and are intense for 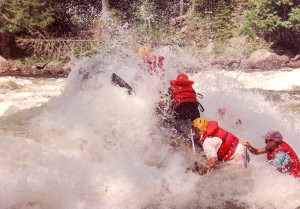 the first four miles. Rapids include the breathtaking Three Sisters, Alley Way, and Magic Falls (which is the largest drop on the river).

The photo at left shows me, wearing a yellow helmet, as we blast through a huge rapid.

Central Maine Power Company controls the water flow from the Dam. High-volume water gives the Gorge some of the best continuous heavy whitewater in the eastern U.S. Afterwards, not only did they show us slides of the trip, but they also showed us a professionally made video of it—complete with background music, slow-motion scenes, and subtitling. I buy the video as an amusing memento to look back at when I’m in my 80s. Next time, I want to try the Penobscot River, which I am told, has more dangerous rapids.

After rafting, I spend two days on a mountain bike trip with this laid-back, granola-type new-age guy in the western Maine wilderness. Once again, I have a great time. His tours are very small (it was just him and me) and customized so that you design the tour to whatever your interests might be. He takes me on some of the best and most grueling and unforgiving mountain bike trails I’ve ever been on. We also go canoeing on a “bog,” and soak in a hot tub at the end of both days. One of the most enjoyable aspects of it is the absolutely quiet atmosphere: no sounds of cars, planes, power tools, or people. Just a deafening silence. The experience is superlative. On one night, I pick out and prepare a dinner from one of his vegetarian cookbooks. It is so delicious that I write it down to bring home with me.

The trip concludes with a ride up the southern Maine coast (George Bush and obnoxious tourist country). Fortunately, I am able to largely escape both of those problems. I spend a few days in Portland, which is an excellent, pedestrian-friendly city (photo at right) filled with grand Victorian homes (and a great condom shop!). 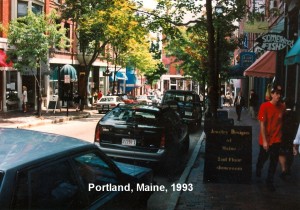 Along the way, I stop in approximately 40 old bookstores and buy five or six freethought books—unfortunately, the state is extremely weak in that category. They feature mostly travel books.

This YouTube video consists of photos I shot while visiting Maine: http://www.youtube.com/watch?v=KJRJtIo8lKo

In 1994, the state population was 1,240,000. The coast contains a bay that gets the highest tides in the U.S. (288 feet in Passamaquoddy Bay). There are 2,500 lakes in the state and 3,500 miles of coastline. “Downeasters” brag about lobsters and the large temperature range (-46 degrees to 105 degrees). Food canning and freezing are major industries. Statehood came in 1820. Except for the southeastern edge, the state is a wilderness of lakes, streams, and mountains.

Follow Our Footprints to learn how to engage in self-guided, affordable, unforgettable travel to the historic old town centers of Western Europe.